Migrants collect rainwater at a temporary refugee camp near Kanyin Chaung jetty, in Myanmar in June 2015. These Rohingya and Bangladeshis were rescued from a boat carrying 734 people off Myanmar’s southern coast. They had been at sea for more than two months – at the end with little food or water. (Photo: Reuters)

Details emerge about ugly trade in people, camps where ‘boat-people’ were held in dire conditions; IOM probing claim that funds were misused.

More details have emerged about Thailand’s ugly trade in people now that a marathon trial has ended in Bangkok with 62 people convicted of human trafficking and other serious crimes.

Camps set up by traffickers in the jungle on the Thai-Malaysian border to hold Rohingya and other ‘boat people’ existed for many years prior to government crackdown in mid-2015 that curtailed the brutal trade, a key activist group has said.

Freeland, a Bangkok-based non-government group that fights wildlife trafficking and human slavery, worked with Thai police to identify key figures in the smuggling networks that were rounded up and put on trial.

The group said on Friday it “believes that more than 500 people died in the camps where the people in this particular trafficking chain were held, and that the camps were probably there for at least five years or more.”

It also had “digital forensics experts” able to help police access vital data on mobile phones found on drivers and in cars stopped with smuggled Rohingya on board. Data on the phones indicated “the precise route the drivers had taken on multiple occasions… [and] filled in pieces of the trafficking supply chain, and ultimately uncovered the location of some holding camps.”

The data also allegedly led to bank transfers to a senior military officer convicted of trafficking, Lieutenant General Manas Kongpaen. Manas, who was sentenced to 27 years jail, was involved in the notorious ‘pushbacks’ affair in December 2008 and January 2009, when vessels carrying hundreds of Rohingya were towed back into the Andaman Sea and set adrift.

A transcript of the court verdict says that Manas admitted using funds from the International Organization of Migration (IOM) to help pay for the ‘pushbacks’, which sparked a global furore, as hundreds were believed to have died at sea.

IOM officials were shocked when notified about this on Friday – and scrambled to go through its accounts to determine if money was diverted from projects in southern Thailand.

“IOM was not aware of this testimony until Asia Times brought it to our attention,” a spokesman said late on Friday. “We are now investigating whether Lt-Gen Manas Kongpaen could have diverted any money from IOM humanitarian projects and used it to fund a criminal operation to tow boats out to sea. If it transpires that this was in fact the case, we regard it as reprehensible. IOM has a policy of zero tolerance on corruption and if we discover that any of our staff were involved, we will take appropriate action.”

IOM had a $1 million migrant health project over five years (2005-09) split between Ranong and Samut Sakhon provinces, the spokesman said. The project “provided basic healthcare, psycho-social help and some non-food aid (probably hygiene kits and clothing) to 200 or so Rohingya migrants who were detained in the Ranong Immigration Detention Centre.

“But there is no record in the accounts of any payment made to any of the individuals named in the court proceedings. It seems to us very unlikely that a significant amount of money could have been embezzled from either of these fairly small projects eight years ago. But we’ll do our best to ascertain whether there could be any foundation to Lt-Gen Manas Kongpaen’s claims.”

Meanwhile, Australian journalist Alan Morison – an expert on people smuggling on the Andaman coast, which he documented extensively on his website Phuketwan.com before a major legal fight caused him to stop reporting – gave further insights. 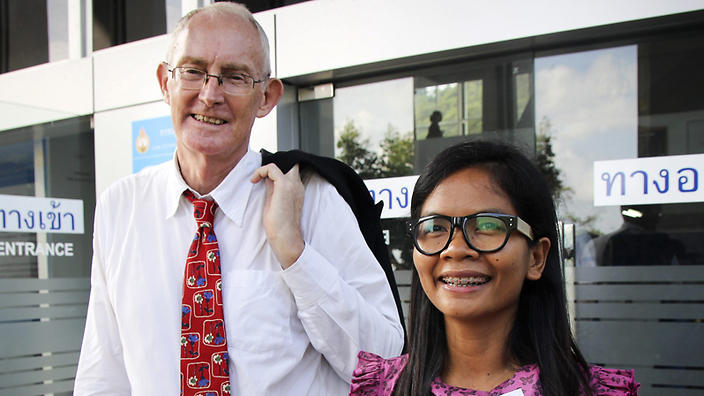 Morison said the involvement of senior officials in the smuggling of people through southern Thailand was a key factor in why the trade exploded so dramatically – and ultimately caused the death of so many people.

‘Everyone knew about it’

“Everyone knew about it. And few people thought it was wrong. We were shown big houses in Ranong and Kuraburi, where locals claimed they were constructed from the proceeds of trafficking.

“Whole villages in Phang Nga and other areas along the coast jumped into the people-smuggling trade because it was so lucrative. Boats were converted so they could carry many more people and people gave up dealing in drugs to get into this,” he said. “And that these places have been hit very hard by the sudden end to the trade because they had become some dependent on the income of people smuggling.”

Initially, he said, people involved felt they were doing it for good reasons, but after a few years “greedy people” appeared to take over the trade and the treatment of Rohingya got much worse.

Freeland, headed by American Steve Galster, said the Rohingya who sought work in Malaysia were put into three classes by the traffickers once they arrived at the camps in southern Thailand.

“Those in good enough physical condition, young, male and strong, were sold to be militants for the opposition party of Malaysia. The older and weaker were sold as labor to either to Malaysian rubber or palm oil farms, or into the fishing industry. A wife and child could accompany them, as long as the buyer was prepared to pay more.

“The third class was the weakest or those with other means to access money. They included the ill, old, women and children. They were kept in the jungle camps and their only options were either for a relative in Thailand to pay a ‘ransom’ for their release or to stay in the camps until they died. Living on one packet of noodles a day and river water most people were in the camp only between 3-6 months.”

The two-year court trial, which ended with 62 people convicted, was very complex, and hampered by many serious challenges, but Freeland was among the groups that lauded the outcome.

Despite the probability that the network extended beyond the 103 people charged, that 62, including the most senior ranking among those accused, have been convicted with long sentences should be fully recognized in appreciation of how much sustained effort and unwavering commitment from critical members of Thailand’s police force and justice system this has demanded.  It is especially important to point out how difficult and dangerous it was for local police … to pursue the web of traffickers. These police should also be congratulated for collaborating with NGOs in their pursuit of justice.”

But Galster said: “The Thai Government must demonstrate that this is not just a one-off.”

This article was originally published by Asia Times. Read the original article.